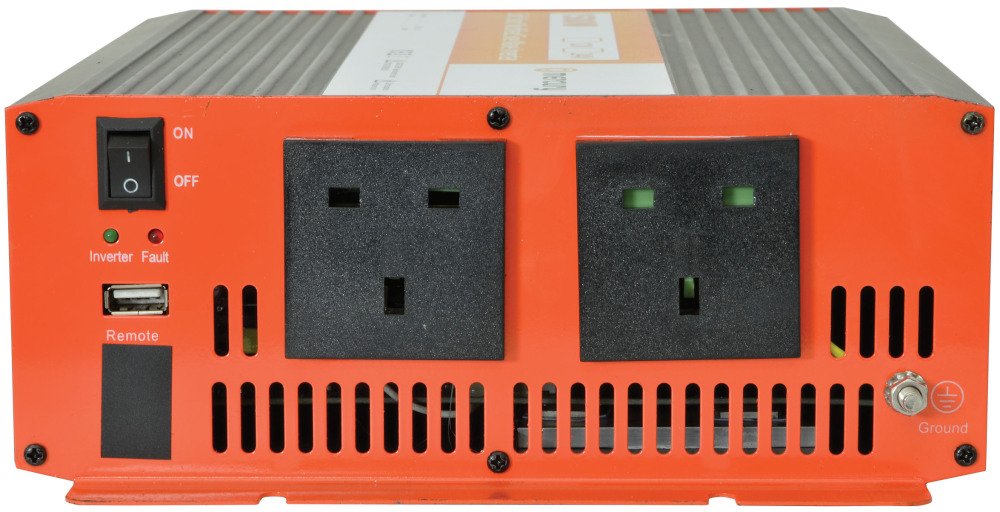 A power inverter converts energy stored in a battery into the electricity needed to run most appliances and electronics.

If you’re looking to create an off-grid power supply using deep cycle batteries or benefit from AC power in a vehicle then you’ll need a power inverter.

In this article, we will answer the question ‘what is a power inverter?’, what type and size there are available, plus any other questions you may have.

What Does a Power Inverter Do?

Wondering what a power inverter is used for?

Whether it’s for an RV, truck, car, boat, camping, or solar panel, a power inverter converts the 12V or 24V direct current (DC) supplied by a battery into at least 110 volts alternating current (AC) that is needed to run larger devices and appliances.

To draw power from a battery it is essential to have a power inverter, it’s the device that connects to the battery that you can plug your appliances and gadgets into.

You’ll be able to plug all sorts of electronics straight into an inverter to power them, just like plugging into a wall socket at home!

Adding to this, you can also quickly connect inverters into the 12V cigarette lighter port in your car to get electric power in your car.

Size and Power of Inverters

As you can imagine power inverters come in all different shapes and sizes. It’s important to take your time to pick one that suits your needs. This is dependent on what devices and appliances you are looking to run.

If you just want to charge portable gadgets, like laptops and phones, then you can opt for something quite low wattage and portable.

On the other hand, if you want to run powerful home appliances like refrigerators, heaters, and power tools then you’ll need some decent power.

You can get power inverters in various different power outputs including:

What Size Power Inverter Do I Need?

To work out what size power inverter you need then you need to decide how many appliances you want to run at a single time. Find the wattage rating for each appliance and add them together to get a total – then you need to buy an inverter with a 20% higher wattage capacity.

For example, let’s say you want to charge a 5-watt phone while running a 100-watt refrigerator, 50-watt lighting, and 200-watt games console. Total these numbers up:

You always need to upsize your inverter as they are not 100% efficient, plus they use electricity to run internal systems such as cooling and screens.

Features on a Power Inverter

Depending on how much you’re willing to spend, power inverters offer all sorts of different features from USB ports to Bluetooth control. Generally, they are built with the user’s intent in mind.

Larger power inverters are designed for use at home, in a static position, or in larger vehicles like semi trucks and boats. Usually, they are designed to be mounted in place in order to run larger home appliances. You’ll find a whole host of different features to choose from including the amount of AC outlets, USB ports, Bluetooth control, remote control, wireless charging, LCD screen, smart fans, and safety alarms.

One of the big differences in types of power inverters is pure sine wave and modified sine wave. It can be a little confusing to understand the difference between the two so here’s a simple explanation:

Modified sine wave inverters tend to be cheaper and sometimes less powerful. They are great for most portable devices, perfect for charging batteries on your gadgets like phones, portable games consoles, and tablets. However, the current is not smooth and continuous enough for more sensitive or motorized appliances.

Pure sine wave inverters are top of the range, suitable for all electronics and appliances. This is because they supply a smooth continuous current just like electricity from the main grid. You can power the most sensitive of devices such as LED TVs, medical equipment, laptops, power tools, digital clocks, digital radio, sewing machines, and laser printers.

Many people prefer pure sine wave inverters as there is no worry about what devices you can power.

If you want to know more about pure sine wave and modified sine wave then check out our full guide.

Can I power my house with an inverter?

A power inverter is able to keep a wide range of home appliances running during a power outage including lights, TVs, games consoles, dishwashers, computers, fans, heaters, refrigerators and most electric appliances. The amount of appliances you can run depends on the power of your inverter.
It is very unlikely you will be able to power your whole house using a leisure battery and power inverter, so you will have to select which appliances you want to keep running.

Are power inverters worth it?

If you want to run off-grid power from a battery or solar panel then power inverters are worth it. In fact, they are essential pieces of equipment! Without an inverter, you will not be able to draw power from your battery. An inverter is a unit that connects to the battery for you to plug appliances into.

Can inverters work without batteries?

This is down to the make and power of your inverter. Small inverters are usually silent as they don’t require big cooling systems. Large inverters tend to produce noise when drawing a lot of power. This is because they have cooling systems like fans to stop overheating. Modern inverters often now include smart ultra-silent fans to help reduce noise.

How do I connect up my inverter?

Your inverter should arrive with all the required cables to hook up to your battery. Smaller systems have easy-to-use alligator clips to attach directly to the red (positive) and black (negative) terminals of your battery. You might also get a handy cigarette lighter plug for your car – simple to use, but will limit your power output to around 150 watts. Larger inverters need to be hard-wired to your battery. This is quite simple to do but if you are not sure always ask a professional.

Want know what brands produce the best power inverters? Here are a few to check out:

BESTEK – Often touted as America’s number 1 inverter brand, it builds a wide range of inverters including a number of high-quality portable products.

Ampeak – A budget-friendly power inverter brand, keep an eye out for their compact orange devices.

Aims – We’ve seen a number of heavy-duty power inverters from Aims who have been in business for over 20 years. Durable no-fuss machines.