Solar Panel Snail Trails: Should You Be Worried? 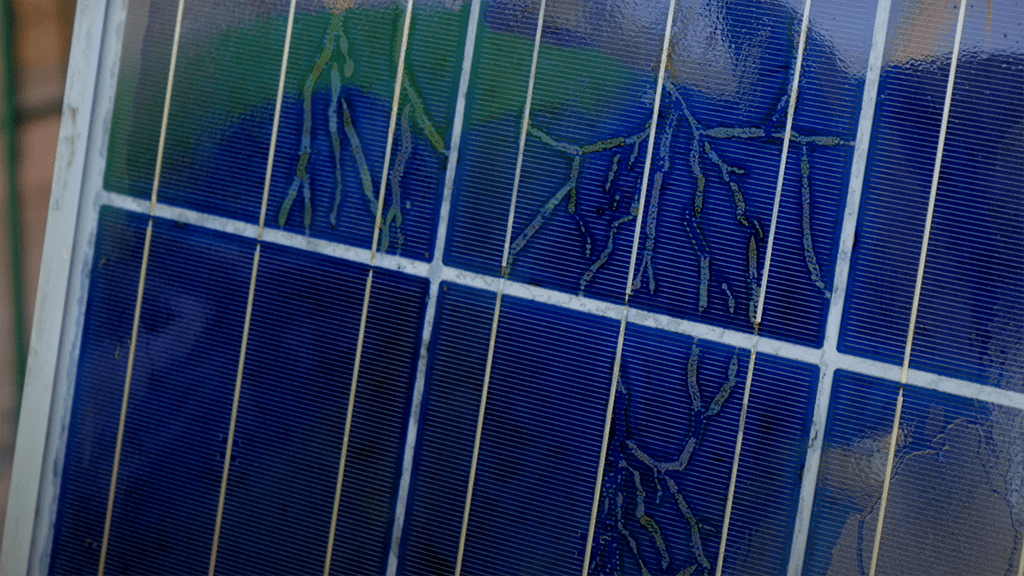 When you first notice snail trails on your solar panel it is very distressing.

Brown worms start appearing across the dark solar cells and you immediately think ‘Oh no’.

After all, solar panels aren’t cheap! And seeing these defects appear in just a few months or years might have you panicking.

Before you think all is lost, you should understand that solar panel snail trails are quite common.

In addition, they don’t always mean you have a performance problem.

You should take the time to investigate further to work out whether you need to address the browning of solar panels.

So take a deep breath and together we’ll go through what is happening, performance issues, and how to fix the issue.

What are Snail Trails on Solar Panels?

Snail trails are brown or dark lines that appear on solar panels.

They are areas of discoloration occurring on solar cells.

They are not caused by snails leaving residue on your equipment, rather the phenomenon just creates a similar shape to that of a snail trail.

You might also hear them referred to as worms or browning.

This type of discoloration usually appears after long usage of a solar panel. It should not be present on new or recently manufactured products.

Most often you will find these brown lines towards the edges of solar cells. Plus they can run through the middle when microcracks are present.

Snail trails occur due to a defect in the solar panel.

It is the slow buildup of silver nanoparticles that diffuses on the cell’s surface. The issue forms when moisture inside the solar panel dissolves silver in the grid contact fingers.

This dissolved silver ion will drift to the EVA foil lamination around the solar cells. As these chemicals come into contact a reaction occurs leading to cell degradation.

In simple terms, it is a type of water damage inside a solar panel either due to organic materials (water and oxygen) which get inside the unit.

The most common way for water to get inside the solar panel is via a leak in the back sheet or microcrack formations.

There is big debate as to whether snail trails reduce the performance of solar panels.

To know whether performance will be dramatically affected you need to look at the source of the issue. Many studies show very little extra degradation to solar panels with this effect.

In fact, snail trails do not result in a noticeable loss in power or performance. Usually, less than 2% and you should be aware that all solar panels degrade slowly over their lifespan.

Any performance issues arise from microcracks that occur before the snail trails form.

“most power losses depended on cell cracks before snail trails appearance. According to our testing results, snail trails are only the poor visual [outcome of microcracks]” – explains research from the Industrial Technology Research Institute.

That means that the discoloration of your solar panels is not directly reducing the performance or degradation of your equipment.

Rather you should be looking at the underlying cause that is allowing moisture to build up inside. It might be a case of fixing cracks!

Defects on solar panels can look a little different depending on the extent of the damage. Here’s what it commonly looks like:

How to Test Solar Panels with Snail Trails

As we have discussed, the most common reason for snail trails to occur is microcracks across the solar cells.

These cracks are not visible to the human eye and you will need to conduct further tests to identify the extent of the problem.

Electro-Luminescence (EL) tests are needed to identify the depth and structure of these microcracks. This almost looks a little bit like night vision for solar cells and helps to spot areas where electric currents are interrupted.

This is not a test you can carry out yourself and needs to be done by a professional. If you have microcracking it does not mean your solar panel is completely broken. It will still be able to deliver a decent amount of power. But you might find that the degradation of performance quickens and reduces its lifespan.

Solar panel snail trails are a relatively common phenomenon, especially with the increasing ages of equipment around the world.

You don’t need to worry too much about the issue if everything in your system is still working correctly. Although, it is wise to have a professional inspect the equipment to carry out any maintenance to reduce water infiltration.

Microcracks can occur naturally during usage due to climate and temperature changes. Plus you risk damage from careless behavior like walking across them. Unfortunately, there is little that can be done to remove them but it won’t always lead to a massive drop in performance.