What Does Photovoltaic Mean? (PV Explained) 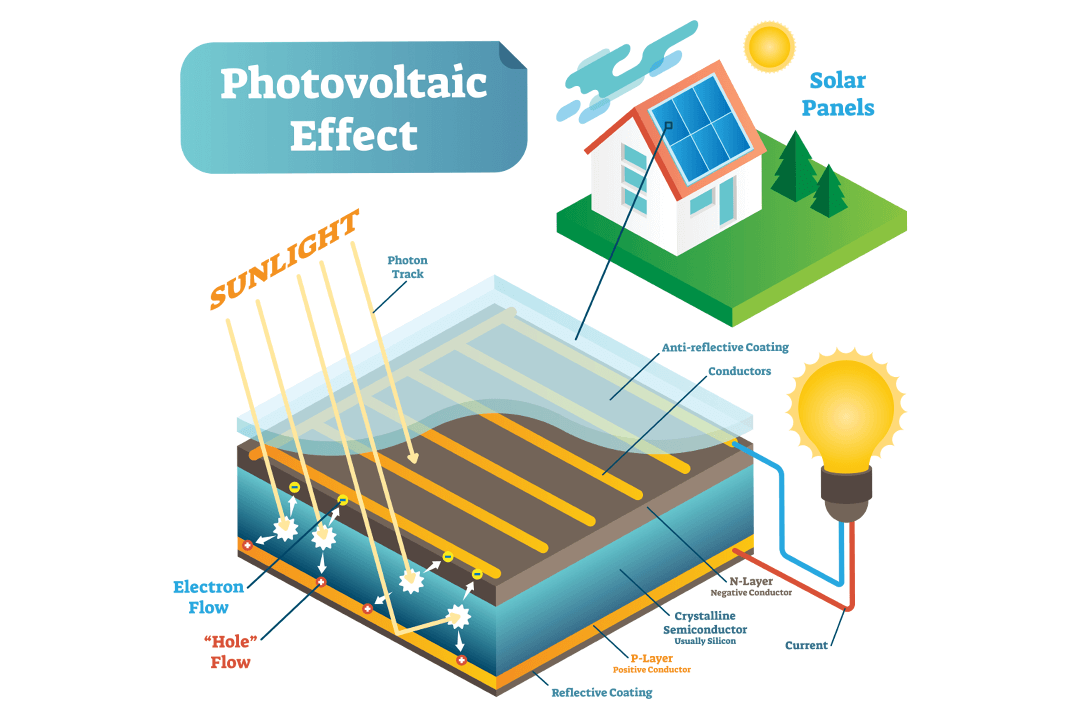 In this article, you will learn the meaning of photovoltaic which is commonly referred to as PV.

When researching solar power you will quickly come across the term photovoltaic effect. The invention of this effect was made in 1877 and it took over a century to increase efficiency to give it a practical application in everyday life.

Now you’ll see and use electricity for PV sources multiple times a day as the world continues its drive to clean energy sources such as solar power.

What Does PV Stand For?

PV means photovoltaic which is a term to describe electricity generated from the energy of light. In most cases, this light source is the sun.

So in literal terms you could say photovoltaic translates to ‘light electricity’.

The PV effect is created using thin sheets of conductive materials like silicon. When photons of light hit the material it energizes the electrons. A direct current of electricity is produced. And voila, you have electricity from sunlight.

Solar Panels and the Photovoltaic Effect

Solar panels rely on the PV effect to generate electricity. A single solar panel is built from multiple silicon cells wired together in a string.

A single PV cell produces a very small amount of electricity but when connected together they can produce a strong output. This power can be anything from 5 watts to 350+ watts in a single solar panel. You can further increase electricity generation by connecting multiple panels together in a single array. This would have hundreds or thousands of solar cells producing the PV effect at once.

This method of electricity generation produces what’s known as direct current (DC). This can be stored in batteries, like car, RV, and marine batteries, to be used later. In order to run most home appliances you need to convert DC to alternating current (AC) which is what you get from the utility grid.

Some small electronics can run from DC provided by PV such as portable devices with batteries or specialist camping equipment.

Find answers to the most common PV questions

What is the difference between solar and photovoltaic?

Solar relates to any energy from the sun. Photovoltaic relates specifically to electricity produced via sunlight. For example, you could heat water from the heat of the sun which would not be the PV effect. But if you produce electricity from sunlight this would use solar power to create a photovoltaic reaction.

What’s another word for photovoltaic?

Are all solar panels photovoltaic?

Yes, all solar panels are made from smaller photovoltaic cells which generate electricity when hit by sunlight. Some people also refer to solar collectors as solar panels. A solar collector does not use the PV effect as it uses the sun’s heat energy not the light.

What are the 3 types of photovoltaic panels?

What Does Photovoltaic ‘PV’ Mean Summary

I hope this article explaining the meaning of photovoltaic gives you a clearer understanding of how solar panels work.

The PV effect is incredible and it enables you to generate electricity directly from sunlight. The benefits to this are immediately clear for everyone to see as a clean, eco-friendly, free, and endless energy source for our planet. As the world moves deeper into an electrical age the PV effect will run more and more of our day to day lives.