Inverter vs Generator: Is an inverter better than a generator? 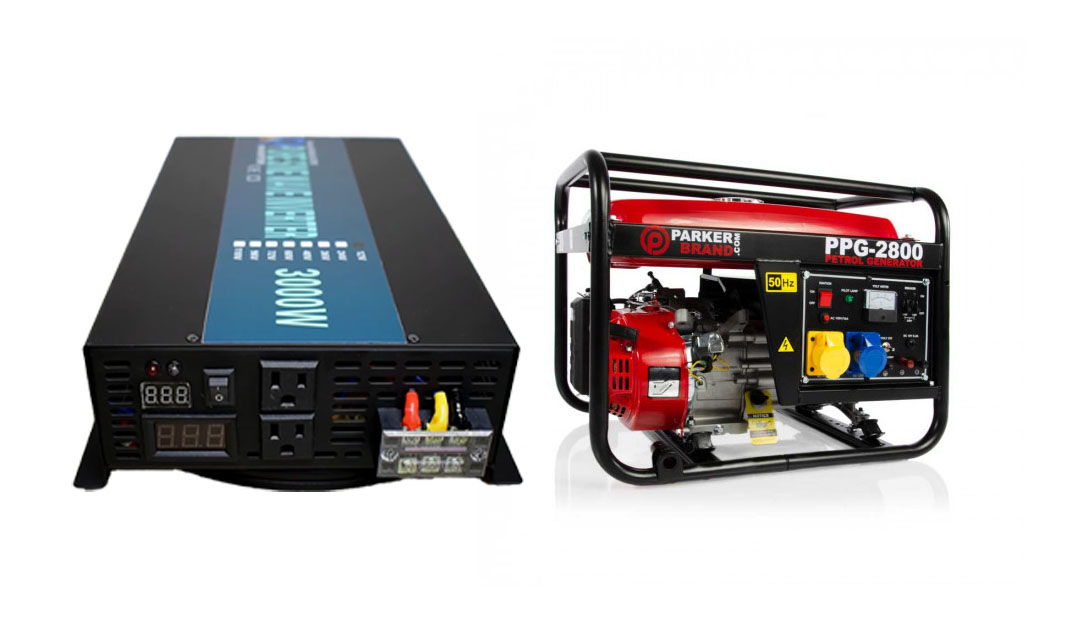 The difference between an inverter and generator is important to understand.

While they both provide a way to power AC appliances with off-grid electricity, the way they work is very different.

An inverter might be suitable in many situations where a generator would not be good to use.

Before you decide which to buy, you should take the time to understand the difference between inverters and generators.

For example, if you drive a semi-truck, a quiet inverter is going to be much better for you than a loud generator.

But if you need to run powerful equipment outdoor then a generator could be just the ticket.

Well, keep reading for all the answers. I’ll go through each piece of equipment and how it works, the key differences, and the pros and cons.

By the end of this article, you’ll be able to make your choice in the battle between inverter vs generator.

What is an Inverter and How Does it Work?

The is an essential device if you want to power appliances from a deep-cycle battery, vehicle battery, or solar panel.

This is because all of the above produce and store DC power but most appliances require AC power. AC power can’t be stored whereas DC can be stored in a battery.

So an inverter enables us to make this conversion to AC power which replicates what you get from the mains electricity grid at home.

Simply put, you need to hook up an inverter to a battery. Then you can power your appliances and electronics from the inverter.

Now the important thing to consider is that an inverter is not a power source on its own. It requires a separate battery in order to work. This is why they are very popular in vehicles such as cars, trucks, and boats, along with solar panels.

All of these have vehicle batteries and the space to add additional deep-cycle batteries. With an inverter and battery, you can then produce AC electricity without the need for loud engines and diesel/gas.

Inverters come in many different power capacities often between 100 watts to 5000+ watts.

What is a Generator and How Does it Work?

A generator is a machine that converts mechanical energy into electrical energy. The most common way to do this is using a combustion engine like in a vehicle.

To run a generator is just like your car. It needs gasoline, diesel, or propane to power the engine, and an alternator creates the electrical output.

Many people love generators as you can generate electricity anywhere and anytime. All you need is the right fuel. Some modern equipment is even hybrid with the ability to use multiple fuel types.

You can get generators in a wide range of sizes from 300 watts to over 10,000 watts. The main problem with them is that they are loud, dirty, and not suitable for confined spaces/indoors.

That being said, advancements in technology have created quiet and inverter generators to reduce this problem a little.

Key Differences Between Inverter and Generator

Now you know what an inverter and a generator are, we can look more closely at the key differences.

The first thing to look at is the current that each produces. As we discussed earlier, most electrical appliances need Alternating Current.

The good news is that both inverters and generators deliver AC power.

That being said, inverters deliver a much cleaner sine wave which is more stable for your electronics. This means you’ll be able to run much more sensitive devices from an inverter than a conventional generator.

You might be thinking that an inverter generator is the best of both worlds, but there are still more things to consider.

Inverters use battery or solar power while generators require fossil fuels like gasoline and diesel.

Of course, the world is slowly transitioning from fossil fuels to battery and renewable energies

But fossil fuels, like diesel, still have one major advantage – convenience. As long as you have this fuel you can produce electricity.

On the other hand, renewable energy and battery power can be limiting at times. For example, you can only charge batteries with solar power during the day! That means if you run out of energy it might take time to replace it.

Many people actually run their inverter using a car, truck, or RV engine which helps to bridge this gap. Although, you need to ensure you run your vehicle engine to ensure you don’t deplete and damage your starter battery.

Power inverters are much quieter than generators.

You might be able to find a ‘quiet’ generator but they are still pretty loud in comparison.

In fact, a power inverter can be completely silent at times and only produces noise from cooling fans.

To put this into perspective, you could happily use an inverter inside a truck cab. While generators need to be placed outside and over 10 meters away. Stood next to a generator you would struggle to have a conversation!

A generator can be 70 – 100 decibels in noise, that’s similar to a vacuum cleaner or lawnmower. A power inverter is silent.

The other problem with generators is that they produce dirty emissions. It’s a combustion engine burning fossil fuels that are poisonous and not environmentally friendly.

What does this mean? Well, it’s just like driving a car. You don’t want to inhale the fumes or use a generator inside. Plus, it will add to your carbon footprint.

In contrast, an inverter doesn’t produce any fumes. They run on electricity so can be used indoors and in confined spaces without any safety issues. You can even run an inverter using solar power to be super eco-friendly.

Both inverters and generators are designed to be portable. After all, you’re looking to generate off-grid electricity, so it’s likely you’ll want to move around.

The two products come in many different shapes and sizes. As a general rule inverters are smaller and lighter but you require a separate power source such as a battery.

While generators a larger and heavier, they are stand alone power units. Plus, inventions like the inverter generator are compact and portable. You can even get them in a handy suitcase design.

Again the price varies depending on the quality and power of a product.

You should remember that you may also need to purchase a battery to run your inverter.

The final key difference is the way you would use each piece of equipment.

Generators must be used outside in a well-ventilated area. This is because of the fumes and noise they produce. It is dangerous to use a generator in an indoor or confined space. Not only will the emissions be poisonous but the noise would be insufferable.

Contrastingly, inverters are designed for indoor use as they do not have any waterproofing or weather protection. You should avoid using an inverter in the rain or direct sunlight. Thankfully, they are quiet to use and emit no harmful gasses so you can happily use them at home or in vehicles like RVs.

Let’s check out the advantages and disadvantages of an inverter in a handy chart.

Let’s check out the advantages and disadvantages of a generator in a handy chart.

That’s it. The battle between inverter vs generator.

The champion? Well, that’s for your to decide.

By now you should know that an inverter converts battery power into AC output, plus is perfect for use indoors or in a vehicle.

On the other hand, a generator is a complete power unit that runs on gasoline, diesel, or propane. You can use them almost anywhere outdoors, just don’t expect any peace and quiet while in use.

You can also choose an inverter generator which is a generator with an inverter built-in for smooth AC electricity. But this will still be noisy with dirty emissions.