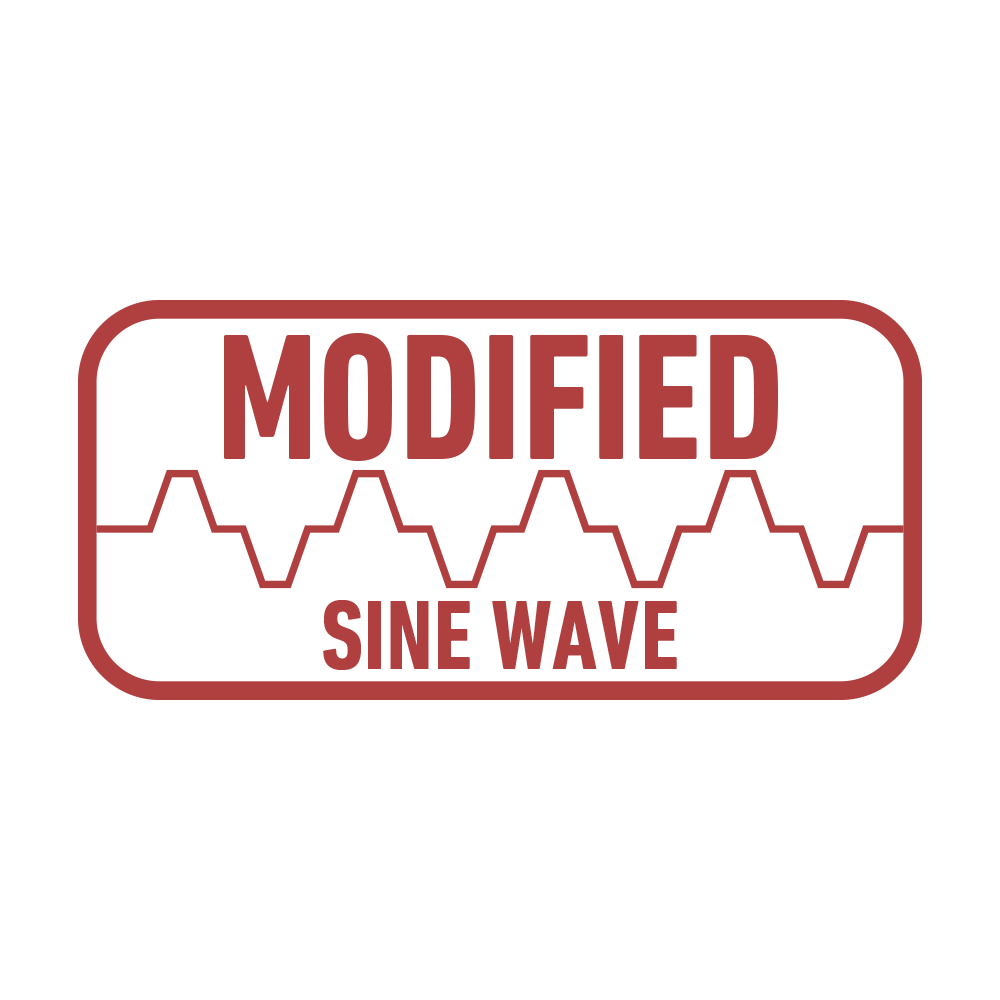 Trying to work out the advantages and disadvantages of modified sine wave power inverters?

Great, you’re in the right place.

If you’ve been doing your research on power inverters then you’ll know there are two different types – pure and modified sine wave.

There’s a lot of information to get through and it can’t be very confusing.

In fact, many so-called experts cast a bad shadow over modified sine wave inverters, to the point that you might be wondering what they will actually power.

Well, you can still get many benefits out of modified sine wave despite a few of the drawbacks.

I decided to write this article to help you clearly see the pros and cons of modified sine wave. And ultimately decided whether it’s right for you.

So let’s dive in.

To start with let’s discuss the benefits of a modified sine wave inverter.

The number 1 reason people choose modified over pure sine wave is the price. They are far more cost effective and will save you a lot of money. Particularly in the higher wattage inverters, you can even save hundreds of dollars.

The lesson here is – if you can manage on modified sine wave it will save you a lot of cash.

Modified sine wave inverters are often much lighter too. This is because of fewer internal components to produce the conversion of DC to AC power. This makes it a consideration if you are using your inverter in a portable fashion or want to save weight in a vehicle like a boat.

If weight is a consideration then modified sine wave has the advantage.

Can Run More Electronics Than You Think

When researching the difference between modified and pure sine wave, you can often be left wondering what you can actually run with on modified sine wave. The list seems quite restrictive and no one gives a definitive answer.

The truth is that you can run most things using modified sine wave inverters, although efficiency might be a little lower. The main thing to avoid is sensitive and precise electronics like medical equipment or laser printer which could be damaged. Plus anything that uses an inductive load like motorized equipment, air conditioner, fridges, or fluorescent lighting.

Here’s a list of items you can use on modified sine wave:

It’s time to take a look at the cons of using modified sine wave inverters. There are quite a few things to consider here.

The first problem with modified sine wave is that is can cause damage to sensitive equipment. This is a massive consideration, especially when using expensive electronics. The last thing you need is for your machine to be damaged so it needs to be replaced, plus you’ll have the wrong inverter for your needs. A double whammy.

You should not use modified sine wave with medical equipment and most manufacturers of items like CPAP and oxygen concentrators heavily warn against it.

You will find that you can use motorized equipment such as microwaves, fans, tools, and refrigerators with modified sine wave inverters. However, be very careful as it will generate excess heat.

This has a few drawbacks, firstly it can present a safety risk such as fire from overheating.

Secondly, this overheating could reduce the lifespan of your appliance as it adds extra wear and tear while in use.

Finally, efficiency will dramatically reduce as you’ll be losing energy through the production of heat rather than concentrating on powering the core function.

As I just mentioned, efficiency takes a big hit with modified sine wave. The delivery of electricity simply isn’t as smooth meaning for many devices it will take longer to reach your desired power level or best-operating conditions.

Adding to this, if you use modified sine wave with an unsuitable appliance like a microwave, you’ll find it not only loses energy through excess heat but you’ll have to run the microwave longer during cooking. Particularly with AC motors, it can be a much as 30% less efficient!

Using modified sine wave for the wrong application might lead to devices being completely inoperable. This is a particular concern for highly precise devices like laser printers. Trying to get high-quality laser prints from modified sine wave just won’t work, you’ll end up with a pretty jerky inaccurate page. That’s no good for anyone!

Finally, one of the major drawbacks to modified sine wave is the excess noise. This is particularly due to things like total harmonic distortion.

You’ll find that you get an extra buzzing sound plus you’ll even get noise interference with radio signals and Televisions. As you can imagine, that can get pretty annoying.

Can A Modified Sine Wave Inverter Run An Air Conditioner?

No, modified sine wave will not work well with an air conditioner. This is because they use refrigeration equipment with a compressor a the heart of the system. Compressors are high powered inductive loads that need a smooth flow of electricity. It will not take kindly to the sharp voltage steps produced by a modified sine wave inverter.

If you try to do this a number of problems will occur. Firstly you will reduce the lifespan of your AC unit as it struggles to operate properly and is put under strain. Adding to this, you might cause damage to the sensitive electronics included in modern AC units. You will also experience excess noise from your inverter.

Will a Modified Inverter Work for You?

There you have it, all the pros and cons of modified sine wave inverters.

Now only you will be able to decide whether it will work for your needs.

Don’t just pick the cheapest inverter to suit your power requirements, but rather pick something based on what electronics you want to run. If you’re just looking to power basic equipment or recharge batteries then modified sine wave will work great and save you lots of money.

This type of output from an inverter has been around for decades and still has its uses today.

On the other hand, if you have sensitive electronics, AC motors, and inductive loads then it’s time to look at pure sine wave.

To find your perfect product take a look at our absolute best power inverter and pure sine wave inverter guides.